Working in tandem with an infectious disease physician and the vascular surgery team, these authors say subsequent correction of musculoskeletal deformities and predisposing biomechanical issues led to a healed DFU and no recurrence in 16 months.

Diabetic limb salvage requires a multispecialty approach to address all the local and systemic manifestations of the disease process. This must become the gold standard to provide optimized care and give patients the best chance at limb preservation.1,2 It is already well established that high-risk patients with diabetes (IWGDF grade 3) suffer from increased rates of amputation with one in five patients having some form of amputation.3,4 Furthermore, Lavery has shown that an orthoplastic approach to reducing pathologic forces within the distal lower extremity is a safe and effective way to help resolve chronic ulceration.5

The systemic and local sequelae in the distal extremities require a fully-armed team including: primary care physicians, foot and ankle surgeons, vascular surgeons, infectious disease specialists, social workers, diabetes educators/dietitians, and orthotists as well as physical and occupational therapists. Treating the diabetic lower extremity is a complex, uphill battle. In order to achieve success, we should be addressing this disease from all angles.

Accordingly, let us take a closer look at a case in which a collaborative approach yielded a good result for the patient, allowing her to be fully functional and wound-free.

A 55-year-old female with type 2 diabetes mellitus, coronary artery disease (CAD) and a previous history of osteomyelitis presented to the emergency room with a long-standing ulceration underneath the first metatarsophalangeal joint (MTPJ). In addition to the wound probing to bone, there was malodorous drainage and cellulitis as well as complete exposure of the first MTPJ, indicating a septic joint. Radiographs revealed subcutaneous emphysema and evidence of osteomyelitis. Additionally, the patient had complete dorsal dislocation of the first and second MTPJs. Physicians subsequently performed incision and drainage with bone debridement and bone biopsy of the first MTPJ. 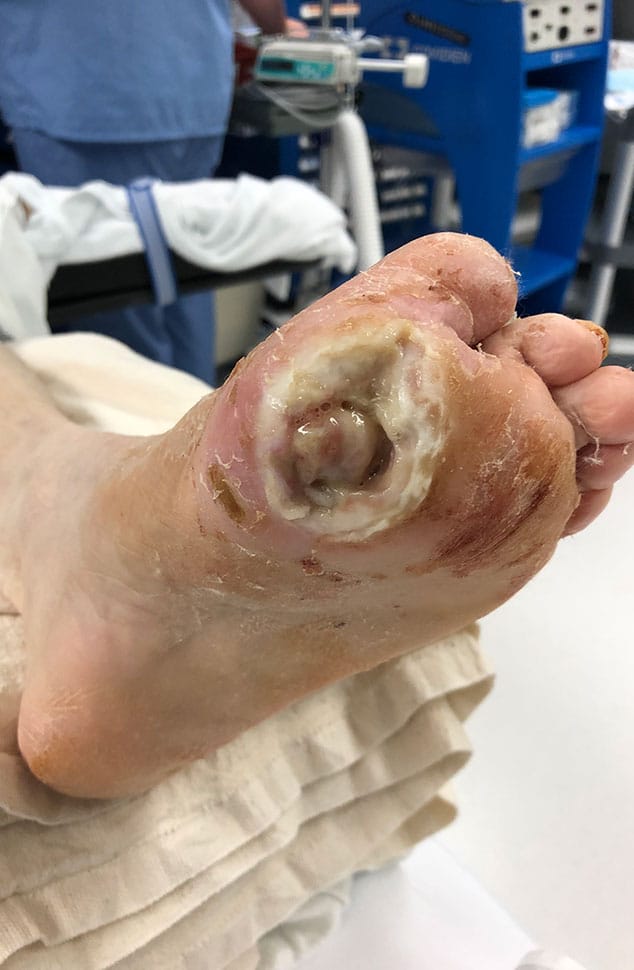 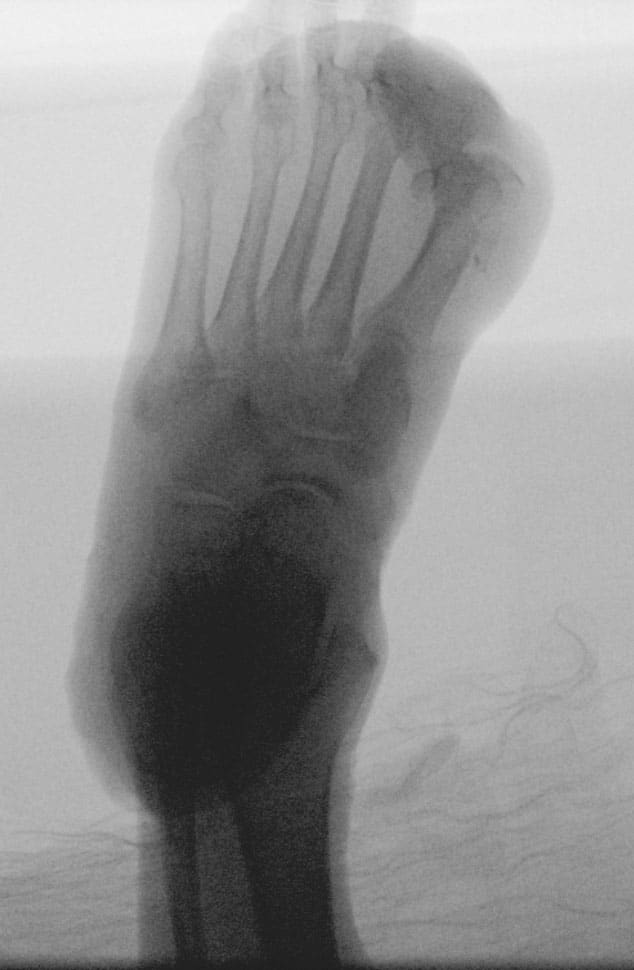 The patient also had abnormal non-invasive arterial studies with monophasic flow noted. Once the aforementioned infection was resolved, the vascular surgery team took the patient into the cath lab for an endovascular procedure to restore perfusion to her foot. The procedure resulted in improved blood flow, allowing for reconstructive foot surgery once the infection was no longer present.

The patient had a significant gastrocnemius equinus contracture and a significant deformity at the first MTPJ with dorsal subluxation/dislocation secondary to contracture of the extensor hallucis longus (EHL) as well as subluxation of the second MTPJ, which had led to increased forefoot pressures and ulceration.

The initial surgery consisted of an aggressive incision and drainage with bone debridement, biopsy and bone resection. An extensor hallucis longus (EHL) lengthening was performed in order to reduce the first MTPJ dislocation. After resecting the bone aggressively down to healthy bone and performing a pulse irrigation, we felt that surgical debridement and removal of all non-viable tissue and bone resulted in a surgical cure. We inserted a large k-wire to stabilize the dorsally dislocated great toe and maintain better anatomic alignment. Clinicians subsequently applied continuous negative pressure wound therapy (NPWT) at 200 mmHg.

At approximately two months post-surgery, the patient’s serum markers improved significantly. The wound also demonstrated nice improvement. Unfortunately, the patient had removed all dressings and displaced her k-wire. She subsequently presented with serous drainage and periwound erythema from weightbearing on her wound and plantar foot. The patient was again admitted to the hospital. She had a second incision and drainage procedure with bone debridement and biopsy, reduction of first MTPJ dislocation, an application of bovine bilayer synthetic graft and NPWT application.

The patient was subsequently seen in the office weekly for local wound care, NPWT dressing changes and offloading cast application due to the patient’s non-adherence relative to her weightbearing status. The patient was subsequently able to achieve complete healing of the plantar wound approximately four months from the index procedure. Her serum markers also demonstrated a complete recovery from her infection.

During preparation of the arthrodesis site, we sent bone out for culture and pathology due to the patient’s history of osseous infection. There was no clinical evidence of infection, and this was supported by the pathology and culture report. The fixation construct consisted of a locking plate with locking and non-locking screws. She was allowed to bear weight immediately in a pneumatic walking boot and went on to heal uneventfully. She has had no recurrence in ulceration since these reconstructive procedures. 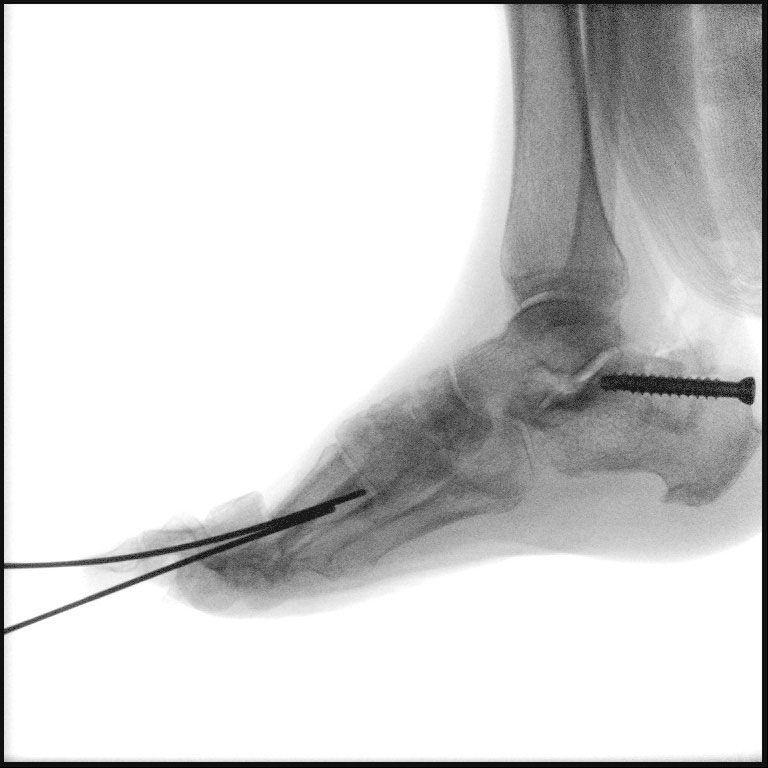 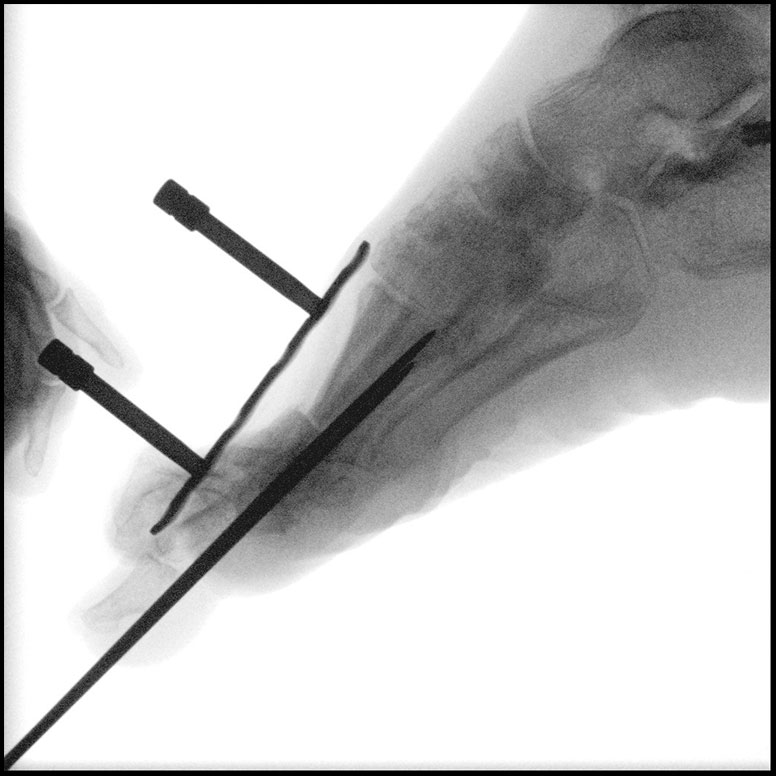 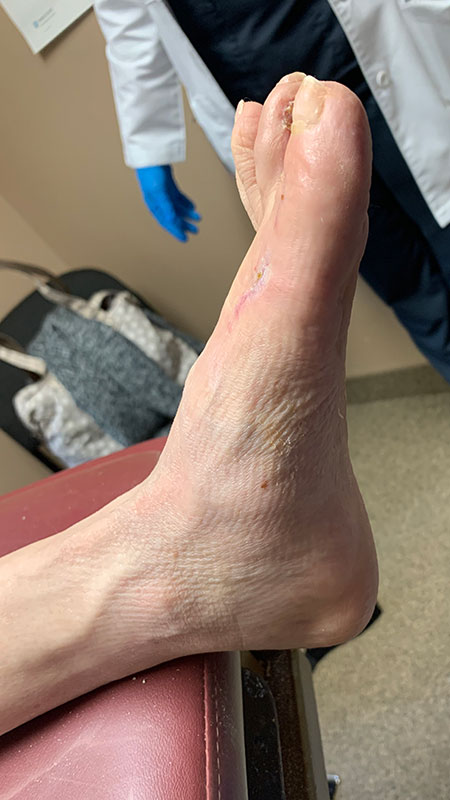 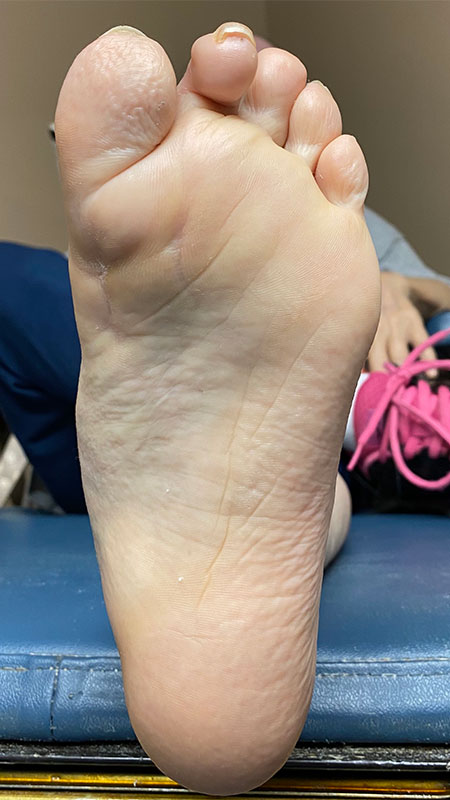 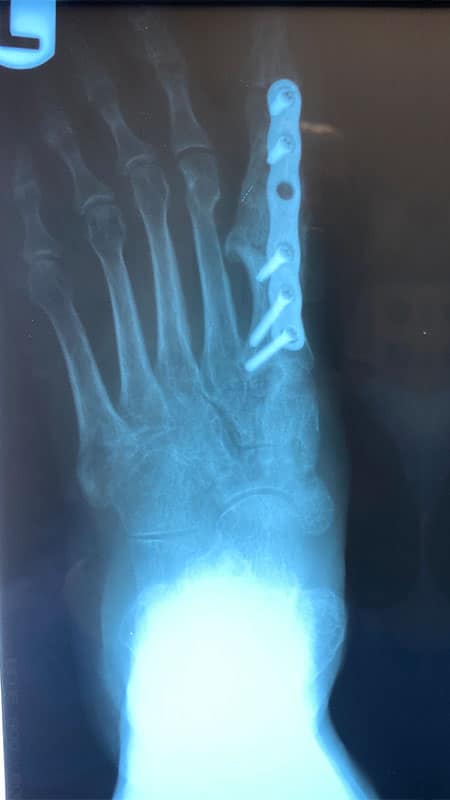 The multidisciplinary approach demonstrated in the above case allowed a high-risk patient to heal a complex, chronic wound and avoid amputation. As one can observe from the case, correction of the underlying musculoskeletal deformity and biomechanical process removed the deforming factors and decreased the risk of reulceration in this patient. Twenty-two months after the initial evaluation (and 16 months after the aforementioned reconstructive procedures), the patient has a stable plantigrade, well-aligned foot and has not experienced any wound recurrence.

Dr. DiDomenico is the Director of Residency Training at East Liverpool City Hospital in East Liverpool, Ohio, and is the Director of Fellowship Training at Northern Ohio Medical Specialists (NOMS) Ankle and Foot Care Centers. He is an Adjunct Professor at the Kent State University School of Podiatric Medicine, and Section Chief of the Department of Podiatry at St. Elizabeth Medical Center in Youngstown, Ohio.

← Prev: Study Finds No Change in 20 Years for Reamputation Rates in People with Diabetes Next: ALPS Announces New Partnership with APMA →