Emphasizing multidisciplinary collaboration, medication adherence and appropriate follow-up, these authors discuss the workup and management of a patient who previously had multiple failed treatment interventions.

Peripheral arterial disease and infection have a significant impact on healing rates in diabetic foot infections and are the leading causes of lower-leg amputations in patients with diabetes.1 Research has continued to support the effectiveness of multidisciplinary approaches to limb salvage.2 With aggressive surgical management, researchers have reported a reduction in minor and major amputations, length of stay, and total cost of care.3 The following case report highlights the collaboration between multiple specialties in prevention of major amputation in a high-risk patient.

A 48-year-old male with a history of diabetes mellitus, hypertension, hyperlipidemia, alcohol and substance abuse, and 30 pack-year smoking history initially presented to the emergency department with foot pain and an abrasion to the left second toe. The patient had non-palpable pedal pulses, but the foot was not cold to the touch. His glucose was 427 mg/dL and his HbA1c was 12.4%. An arterial duplex ultrasound showed acute on chronic short segment occlusion of the distal superficial femoral artery (SFA).

He was taken to the interventional suite for thrombolysis. Hematologic consultation and workup to investigate his self-reported family history of thrombosis revealed a heterozygous prothrombin gene mutation. Due to this finding and the unprovoked arterial thromboembolism, lifelong anticoagulation was recommended for this patient. He was discharged on warfarin but was non-adherent with his medications as he could not afford the outpatient laboratory monitoring.

The patient presented again four months later with worsening leg pain and recurrence of the distal SFA occlusion. While the patient was started on a heparin drip, he developed thrombocytopenia to 106,000 cells/µL and was subsequently converted to argatrobran. A workup for heparin-induced thrombocytopenia was unrevealing. A repeat angiogram showed increased clot burden (despite the use of tissue plasminogen activator (tPA)) with mid-to-distal left SFA occlusion as well as occlusion of a previously placed stent. He was again discharged on warfarin and counseled on the risk of limb loss.

Two months later, a new left second toe wound prompted noninvasive vascular studies that revealed a left ABI of 0.46 with a great toe brachial index (TBI) of 0 (see Figure 1). A week after the outpatient noninvasive vascular testing, the patient presented to the emergency department with worsening of this wound and subjective fevers. While the patient was afebrile upon admission, he was tachycardic. Pertinent laboratory studies included an erythrocyte sedimentation rate (ESR) of 30 mm/hr, C-reactive protein (CRP) of 12.6 mg/L, HbA1c of 7.3%, and subtherapeutic international normalized ratio (INR) of 1.1. His WBC count was within normal limits. His dermatological exam revealed erythema and edema of the left second toe with a 2 cm x 2 cm purulent wound at the distal tip that probed to bone (see Figures 2a and 2b). When it comes to diabetic foot ulcers, Grayson and colleagues previously noted that probing to bone has a sensitivity of 66 percent for osteomyelitis, a specificity of 85 percent, a positive predictive value of 89 percent, and a negative predictive value of 56 percent.4 Vascular examination revealed absent dorsalis pedis and posterior tibial pulses bilaterally. 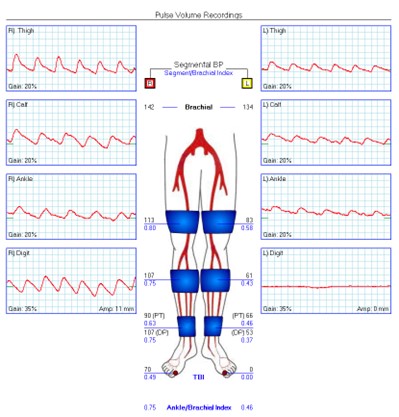 Radiographic imaging of the left second toe showed possible osseous erosion of the distal phalangeal tuft (see Figure 3). Magnetic resonance imaging (MRI) of the left lower extremity confirmed a sinus tract with contiguous osteomyelitis of the distal phalanx of the second toe (see Figure 4). Computed tomography angiography (CTA), performed upon the patient’s admission to the hospital, revealed occlusion of the left proximal SFA with reconstitution of the popliteal artery distal to the stent as well as subsequent distal occlusion with reconstitution at the level of the anterior tibial origin. There was three vessel runoff to foot otherwise.

The patient began broad spectrum antibiotics (vancomycin and piperacillin/tazobactam) while awaiting cultures. He was also placed on enoxaparin. 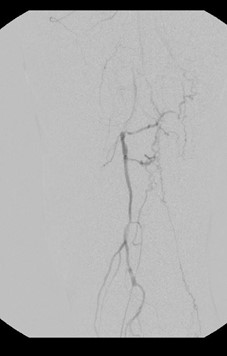 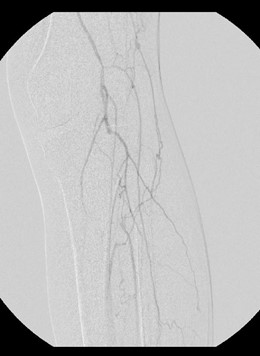 On postoperative day two, the patient had a partial amputation of the left second toe at the level of the proximal phalanx with primary closure. Clean margin bone pathology was negative for residual osteomyelitis, but microbiologic culture revealed methicillin-sensitive S. aureus (MSSA). The patient was discharged on postoperative day seven with a PICC line for completion of six weeks of intravenous cefazolin. He was discharged with apixaban anticoagulation maintenance.

The patient was seen weekly in the wound care center for localized necrosis of the distal flap. At about three and a half months postoperatively, the proximal phalanx was exposed at the amputation site. The bone was resected in the office and skin was reapproximated with sutures. Three weeks later, stitches were removed, and the amputation site appeared to have primary healing (see Figure 6). 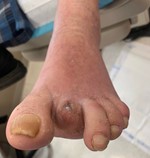 This case displays the importance of a multidisciplinary approach to limb salvage including the involvement of vascular surgery, podiatric surgery, infectious disease, hematology, internal medicine, and interventional radiology. Clearly, this patient was at high risk of major amputation given his history of diabetes, tobacco use, medical non-adherence, and prothrombin gene mutation with multiple failed endovascular interventions. Interestingly, a recent meta-analysis has identified a higher prevalence of prothrombin gene mutation in patients presenting with critical limb ischemia, despite finding no association between the mutation and peripheral arterial disease.5

This case study also highlights the importance of medication adherence in preventing complications. A study found that $105 billion was spent in 2012 due to medication non-adherence, and 69 percent of that was spent on hospitalizations.6 In another prospective study with monitoring of warfarin adherence using electronic sensors on patients’ medication bottles, researchers found a 21 percent rate of non-adherence in observed patient days.7 This case study highlights the need for physicians to identify patients who may be at higher risk of non-adherence, including those who suffer from substance abuse.8

With a multidisciplinary approach and revascularization of the left limb via lower extremity bypass, the patient was able to avoid major amputation with continued outpatient podiatric care following his partial second toe amputation.

Dr. Hussain is a first-year resident in podiatric medicine and surgery with RWJ Barnabas Health in Toms River, N.J.

Dr. Koleilat is a Fellow of the Society for Vascular Surgery and the American College of Surgeons. He is affiliated with RWJ Barnabas Health and is the Program Director of the General Surgery Residency in Toms River, N.J.

END_OF_DOCUMENT_TOKEN_TO_BE_REPLACED

In a case involving the treatment of necrotizing fasciitis in a 30-year-old patient with diabetes...