In a case involving the treatment of necrotizing fasciitis in a 30-year-old patient with diabetes and Charcot-Marie-Tooth disease, these authors discuss the use of serial debridement, free flap reconstruction and a staged equinovarus reconstruction to achieve a healed wound and plantigrade pedal alignment.

A collaboration of care was established with plastic reconstructive surgery, vascular surgery, hyperbaric medicine, and podiatric surgery. Serial debridements were performed and eventually followed by a staged free-flap reconstruction utilizing an anterolateral thigh fasciocutaneous flap. After allowing time for flap healing, subsequent staged equinovarus reconstruction was also performed successfully. There were no flap or postoperative complications, and the patient is progressing as expected.

Flap reconstruction procedures have been utilized to enhance cosmetic and functional outcomes. This report not only showcases the success of a procedure high on the reconstructive ladder in a patient at high-risk for complications, but also highlights an approach that optimizes functional recovery successfully in a planned, staged multidisciplinary manner.

The annual incidence of necrotizing fasciitis ranges from 0.3 to 5 cases per 100,000 population.1,2 Approximately one-third of these infections are associated with diabetes mellitus, and 38 to 54 percent affect the lower extremities.2-6 The prevalence of Charcot-Marie-Tooth (CMT) in the general population is 10 percent with variable phenotypic expression and the overall prevalence in type 2 diabetes mellitus (DM) is even more rare with only case studies noted in the literature.7,8 Further, the presentation of necrotizing fasciitis of the foot in a patient with diabetes and severe CMT deformity has not been formally described in the literature to date.

Surgical inspection and excisional debridement are the mainstays for diagnosis and treatment of necrotizing soft-tissue infections.1 Patients require an average of three debridement procedures to achieve appropriate margins and clearance of infection.9 Debridement often results in a large wound that may not be durably covered with local or synthetic reconstructive options. Particularly in the extremities, these defects pose a therapeutic dilemma, and the literature is scarce regarding indications for free flap reconstruction versus amputation. When it comes to necrotizing fasciitis of the foot in the context of diabetes in which there is an increased risk of peripheral vascular disease, physicians have traditionally opted for a preemptive distal limb amputation.10,11

However, studies have shown that one can achieve salvage of the distal limb by employing microvascular free tissue transfer.12-14 The frequency of this treatment is low as less than 10 percent of all patients with necrotizing fasciitis receive free tissue transfer reconstruction.3,15 Accordingly, we would like to present a unique case that involved free flap reconstruction and a subsequent staged reconstruction of a CMT equniovarus deformity to address a significant dorsal foot wound secondary to necrotizing fasciitis in a patient with diabetes.

A Closer Look at the Initial Patient Presentation and Treatment

A 30-year-old male presented initially in early March of 2019 to an outside hospital with a large hemorrhagic blister between his right fourth and fifth toes, extending toward the dorsum of the foot with peripheral bluish discoloration and increased swelling (see Figure 1A). He was tachycardic but was otherwise afebrile and normotensive. His initial lab work was significant for a white blood cell (WBC) count of 27 x 109/L and a plain film of the right foot demonstrating gas within the dorsal soft tissues.

He was started on intravenous vancomycin, clindamycin and piperacillin/tazobactam (Zosyn, Pfizer). He was taken immediately to the operating room (OR) by podiatric surgery for a right foot debridement. The next day, the patient had repeat debridement as well as a partial fifth ray amputation (see Figure 1B). Intraoperative wound cultures revealed group B streptococcus (Streptococcus agalactiae). A negative pressure wound therapy (NPWT) device was applied and then the patient was transferred to one of our affiliated hospitals for tertiary care and complex reconstruction evaluation. 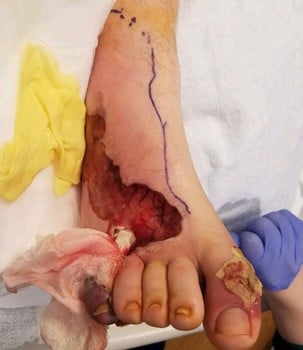 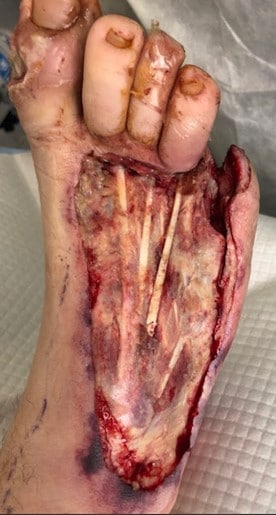 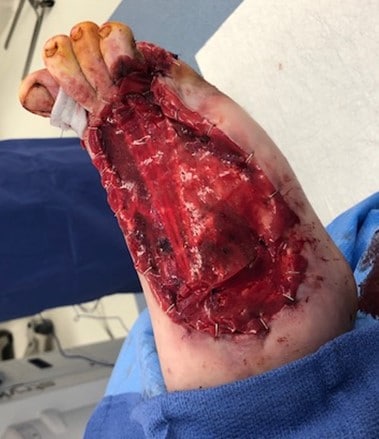 Assessing the Patient for Tertiary Care and Reconstructive Surgery Options

The patient’s past medical history included poorly controlled Latent Autoimmune Diabetes of Adulthood (LADA), hypertension and CMT disease diagnosed by phenotypic expression and prior neurology evaluation. His medications included oral metformin and lisinopril. The patient had no pertinent prior surgical or family history, but his social history was significant for ongoing tobacco use. At our institution, the patient was afebrile, normocardic and normotensive. Lab test results demonstrated a WBC count of 19.1 x 109/L, an erythrocyte sedimentation rate (ESR) greater than 140 mm/hr, C-reactive protein (CRP) of 6.2 mg/dL, blood sodium level of 134 mEq/L, and blood glucose of 163 mg/dL.

The physical examination of the foot showed an open wound involving most of the dorsum of the foot, extending laterally and distally toward the fifth ray amputation site with exposed tendon. The dorsalis pedis artery was palpable but the posterior tibial artery was not. Repeat plain films of the foot demonstrated a pes cavus deformity with gastrocsoleus equinus of 27 degrees and an absence of any soft tissue gas (see Figures 2A and 2B).

On the second hospital day, the patient had additional surgical debridement. Intraoperative findings were significant for residual loculated collections in the second through fourth interspaces (that were subsequently drained); osteomyelitis of the interphalangeal joint of the right hallux (requiring resection of the proximal phalanx and base of the distal phalanx); and osteomyelitis of the fifth metatarsal. The wound was 10.5 x 8.8 x 1.1 cm in size (see Figure 1C). One gram of vancomycin powder was applied to the area and sealed with a NPWT device. Swab cultures taken from the debrided wound were negative. 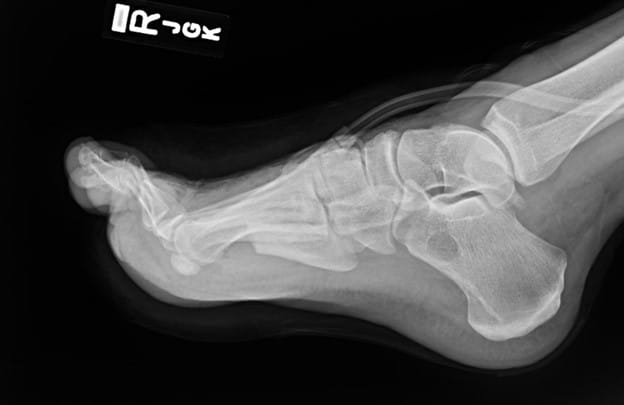 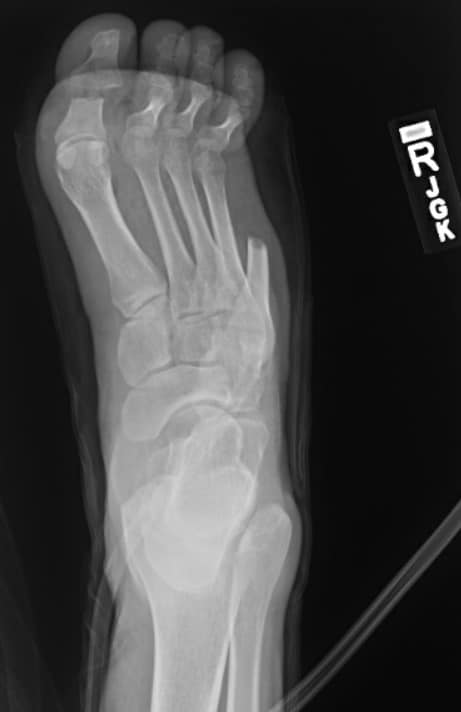 The patient started on hyperbaric oxygen therapy (HBOT) but he incurred barotrauma to his left tympanic membrane on his first dive. On the fourth postoperative day, the patient returned to the OR for a bilateral myringotomy with tube placement by otolaryngology. The patient also had additional debridement of the wound, a proximal interphalangeal joint resection of the hallux with subsequent application of an Integra® Bilayer Matrix Wound Dressing (Integra LifeSciences) over the area, an extensor hallucis longus (EHL) lengthening, and metatarsophalangeal joint (MTPJ) capsulotomy of the first through fourth digits (see Figure 1D). He completed eight HBOT sessions and was then transferred to our main hospital for complex soft tissue reconstruction of the foot.

The NPWT was discontinued due to frequent malfunctions. An AdapticTM Non-Adhering Dressing (KCI/3M) was applied to the wound and covered with dry sterile dressings. A right lower extremity angiogram was performed for vascular assessment and preoperative planning for free flap reconstruction. All vessels were noted to be patent. Additional debridement and wound inspection revealed an appropriately healing wound, which measured 10.8 x 6.8 x 0.2 cm in size at this time. Cultures of the fourth toe identified a rare growth of coagulase negative Staphylococcus. Two days later, the patient was taken to the OR for wound bed preparation by plastic surgery. The surgeons subsequently applied a temporary Integra Bilayer Matrix Wound Dressing to the prepared wound bed (8 x 15 cm) and covered it with xeroform.

Five days later, surgeons obtained a left anterolateral thigh free flap from the patient and applied it to the right foot with partial resection of the fourth metatarsal head secondary to osseous protrusion at the recipient wound site. The case was performed with the patient supine and under general anesthesia. One surgeon raised the anterolateral thigh flap while the other surgeon prepared the recipient site and exposed the target vasculature. The anterolateral thigh flap was raised in the standard fashion and measured (14 x 32 cm). The anterior tibial artery and the greater saphenous vein were exposed and prepared in the usual fashion. The flap was then transferred successfully with resultant cutaneous Doppler signals. While there was mild thickening of the anterior tibial artery, the surgeons saw no evidence of clinically significant calcific or atherosclerotic disease. Total ischemic time was an hour and 20 minutes. A Penrose drain was utilized for dependent drainage.

The donor site was reconstructed with partial closure and a split-thickness skin graft (STSG). Postoperatively, the patient was placed on q1 hour flap checks for 24 hours with subsequent transition to q2 and then q4 hour flap checks. The right lower extremity remained elevated and the patient utilized a posterior splint whenever possible with non-weightbearing restriction for 14 days. There were twice daily dressing changes that included washing of the wound site with soap and water before bacitracin and clean dressings were reapplied. 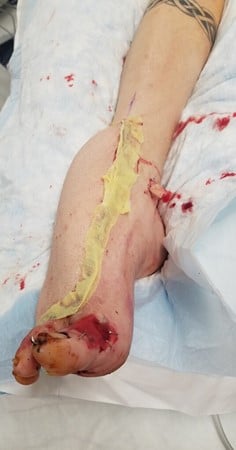 The anterolateral thigh and STSG donor sites were managed in the usual fashion. Dangling was then introduced for five-minute intervals three times daily with five-minute increases in intervals every third day. No postoperative complications were noted two weeks after these procedures. The total length of hospital stay was 50 days. The patient returned for clinic follow-up monthly. During this time, the flap appeared to be healing appropriately with full wound coverage and no signs of infection or complications.

Four months after the flap procedure, podiatric surgeons performed equinocavovarus reconstruction with a Steindler stripping, open Achilles lengthening, dorsiflexory wedge osteotomy of the first metatarsal, interphalangeal joint arthrodesis, and a Dwyer calcaneal osteotomy (see Figures 4A and 4B). The patient was subsequently discharged in a posterior splint and continued to maintain non-weightbearing status for the right lower extremity. No complications were noted in his postoperative course and outpatient plain X-ray films demonstrated optimal reconstruction. 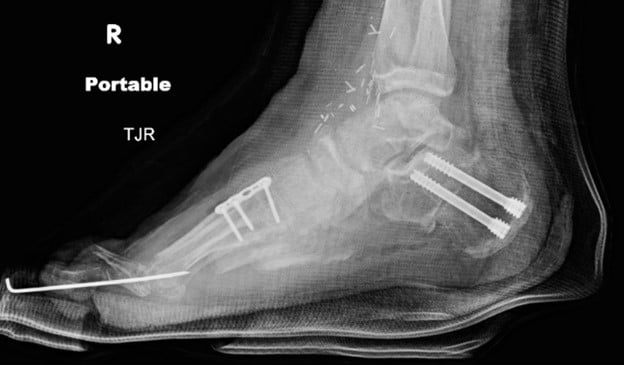 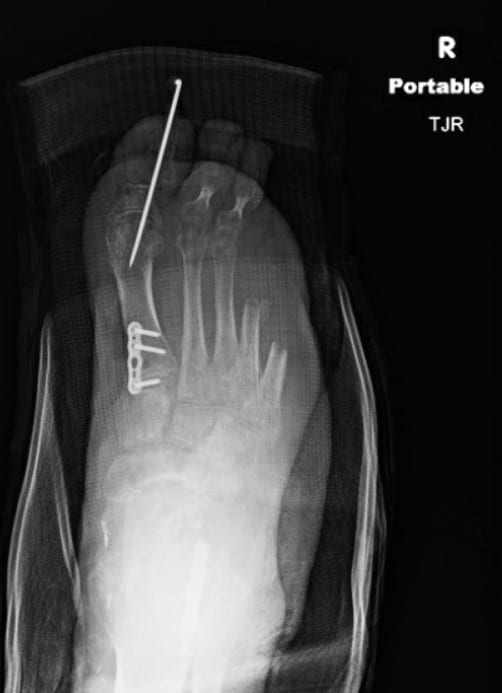 At a six-week follow-up visit, the patient was weaned from narcotic pain medications and transitioned to a controlled ankle movement (CAM) boot with advancement of weightbearing status to weightbearing as tolerated. The patient continued to improve as expected from his collective procedures and had a flap debulking procedure approximately 1.5 years after flap placement. The patient was recently seen in the clinic for a routine postoperative visit after his debulking procedure and was healing as expected (see Figures 5A-5C). With the completion of his care and rehabilitation, the patient now has a plantigrade pedal alignment (see Figures 6A and 6B). 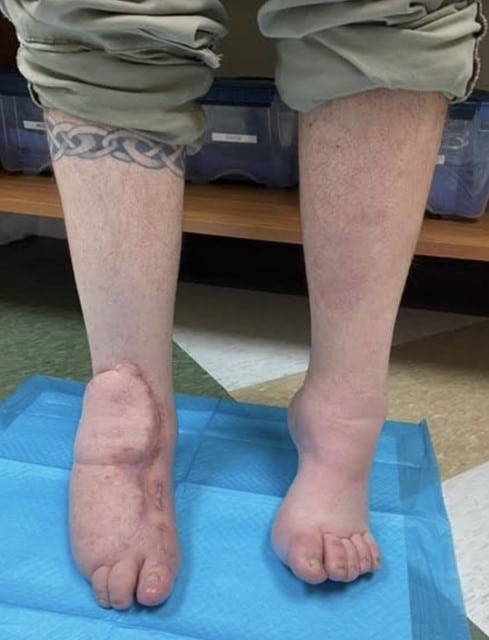 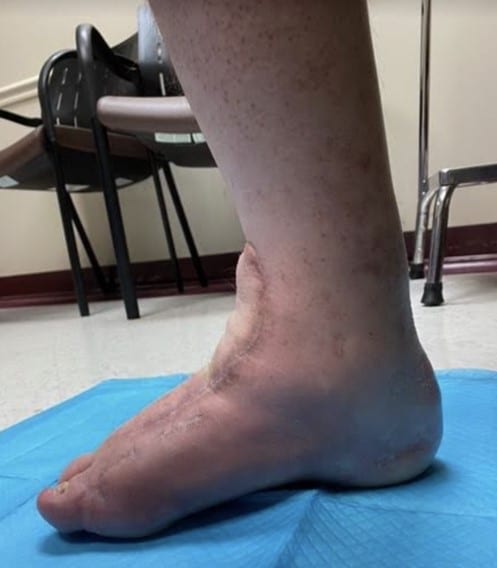 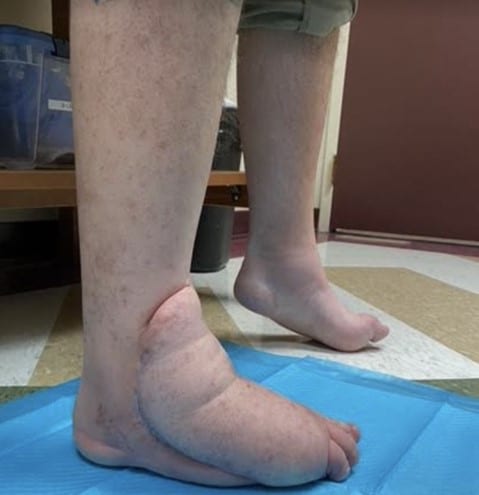 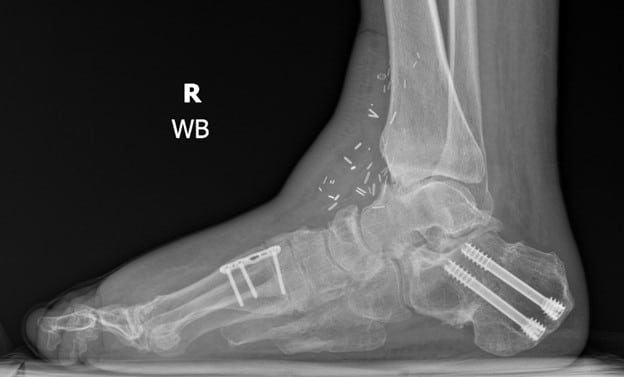 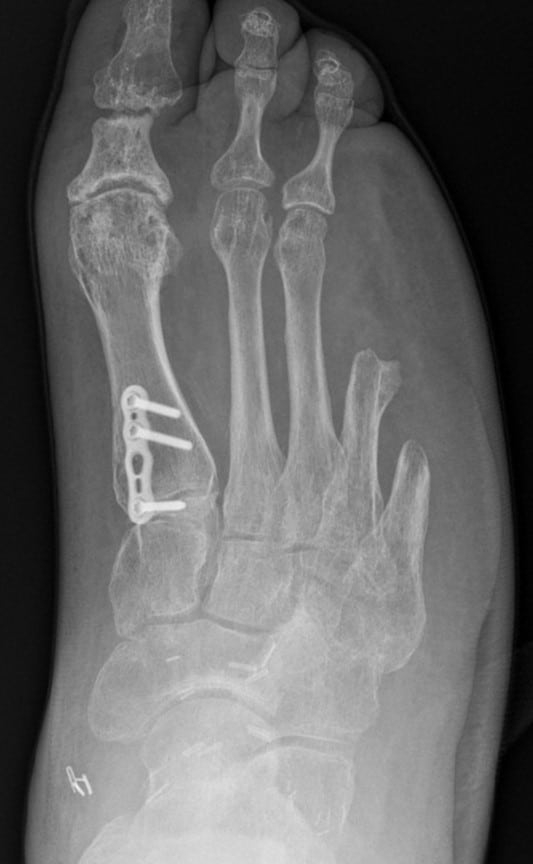 Although excellent limb salvage rates and wound healing via secondary intention with NPWT have been reported in patients with diabetic foot infections, wound healing after debridement for necrotizing fasciitis is difficult due to a variety of underlying comorbidity-related factors, wound size, and the frequent presence of exposed tendons, ligaments, and bones.16 These wounds are not suitable for skin grafting nor coverage with synthetic skin substitutes, and there is not enough local skin to be mobilized as local flaps.4-10 Accordingly, one should pursue free flap reconstruction in these patients, especially given other experiences with diabetic foot reconstructions that have shown a high rate of success with a significant increase in 5-year survival rates.17

This case study demonstrates successful wound reconstruction and structural deformity correction in a rare case of a patient with diabetes and CMT after surgical management of necrotizing fasciitis. Even in the setting of a severe infection that frequently leads to major amputations, if there is limb viability with the chance for eventual independent function, then one can perform wound reconstruction successfully with subsequent correction of any foot deformities to maximize functional restoration.

While more research is necessary to determine short- and long-term outcomes, free flap reconstruction with staged anatomic correction can be successful for select patients with diabetes, substantial pedal deformities and large wounds secondary to severe infections.

Dr. Brandão is the Associate Program Director of the University of Maryland Limb Preservation and Deformity Correction Fellowship. He is a private practice attending at the Center for Advanced Orthopaedics.

Dr. Yoon is a Postdoctoral Research Fellow in Plastic, Reconstructive and Maxillofacial Surgery at the R. Adams Cowley Shock Trauma Center at the University of Maryland in Baltimore.

Dr. Nam is an Associate Professor in Plastic, Reconstructive and Maxillofacial Surgery at the R. Adams Cowley Shock Trauma Center at the University of Maryland in Baltimore.