In a case compounded by infection, neuropathy and significant vascular compromise, these authors discuss emergent debridement, keys to the diagnostic workup and step-by-step surgical considerations in facilitating limb salvage.

Limb preservation is a multifaceted health care specialty requiring timely intervention from a team of providers while navigating to an infection-free functional extremity. A healthy outcome can seem like an uphill battle upon initial evaluation when a positive probe to bone test, loss of protective sensation, and non-palpable pulses are characteristics of the diabetic foot infection.

Grayson and colleagues have noted that a positive probe to bone test in infected diabetic foot ulcers has an 83 to 85 percent specificity for osteomyelitis.1 Although there have been slight deviations regarding this specificity value over the years, studies show that necrotic bone delays wound healing secondary to increased fibrosis, inflammatory cells, and new reactive bone formation.2 The Infectious Diseases Society of America (IDSA) recommends bone resection as the most definitive resolution to treating osteomyelitis.3

Neuropathy is another major obstacle to address in wound prevention and healing. Sympathetic autonomic, somatic, and diabetic peripheral neuropathy lead to loss of protective sensation, causing microtrauma to soft tissue and bone on a repetitive basis. Over 47 percent of diabetic foot ulcers resulting in lower extremity amputation can be attributed to peripheral neuropathy, which can be confirmed with monofilament sensation testing.4 Peripheral neuropathy is the most common etiology of non-traumatic foot amputations in low- and high-income countries.5 Infection can exacerbate rapidly for the insensate patient who is unaware of a pre- or new ulcerative lesion that is neuropathic in nature. In the absence of adequate blood supply, a patient with any extremity infection has a decreased limb salvage prognosis. Arterial disease alone can lead to a 13-fold increase in amputation rates.6

A complete workup for peripheral vascular disease (PVD), beginning with non-invasive diagnostic studies such as transcutaneous oxygen measurement, arterial Dopplers and digital pressures, is recommended to determine healing potential. Confirmed vascular insufficiency warrants a detailed survey of suspected sites of occlusion. A computed tomography angiogram (CTA) is a useful imaging modality. Alternately, the practitioner may decide an angiogram in a surgical suite is best for investigative and immediate intervention purposes.

Infection, neuropathy, and vascular disease are all significant risk factors for diabetic foot complications. We encountered all these challenges in the following case study.

A Closer Look at the Case Study

A 59-year-old male with a history of uncontrolled diabetes, hypertension, and hyperlipidemia presented with concern over a left foot wound. The patient noted that erythema and edema to the forefoot began about four months prior to the office visit. No palliative care had been taken, and it led to the development of a hallux wound. He was unsure of the exact date and mechanism of injury due to a history of insensate neuropathy.

Despite a lack of palpable pulses, an immediate decision was made for irrigation and debridement of non-viable bone and soft tissue to address this limb and life-threatening infection. This included source control of the infection, which required first ray amputation and debridement of non-viable soft tissue including skin, fat, and muscle. Absence of prompt surgical intervention to debride a gangrenous infection can have a detrimental effect on patient mortality. Figures 1a-c shows the initial presentation, post-surgical debridement, and postoperative changes of the infection.

The antibiotic regimen was adjusted based on intra-operative cultures and specimens throughout the treatment course. After the vascular surgery team evaluated the patient, they performed an angiogram with a left lower extremity popliteal to posterior tibial artery bypass shortly after the debridement surgery. Within days of revascularization, there was a healthier granular appearance of the wound bed.

With blood sugar under control and improved vascular inflow, the patient had a significantly better chance at wound healing. To heal an infection of this degree, a repeat surgical debridement was necessary. We decided to proceed to a staged, open transmetatarsal amputation (TMA) with Achilles tendon lengthening. Our surgical goals included removal of residual nonviable soft tissue and bone while preserving a plantigrade foot.

Incision planning focused on dissection with protection of vital neurovascular structures as well as preservation of as much viable soft tissue as possible to assist in bone coverage and rapid wound healing and provide a durable stump to prevent future ulcerations. As one can see in Figure 2a, a long plantar flap was retained laterally, and we performed dorsal debridement dorsally to the level of the fascia. Due to the significant soft tissue loss dorsally, we were unable to anchor the flap to any skin. Therefore, we used a 2 mm drill to place holes in the third through fifth metatarsals and then anchored the flap to bone with absorbable sutures. 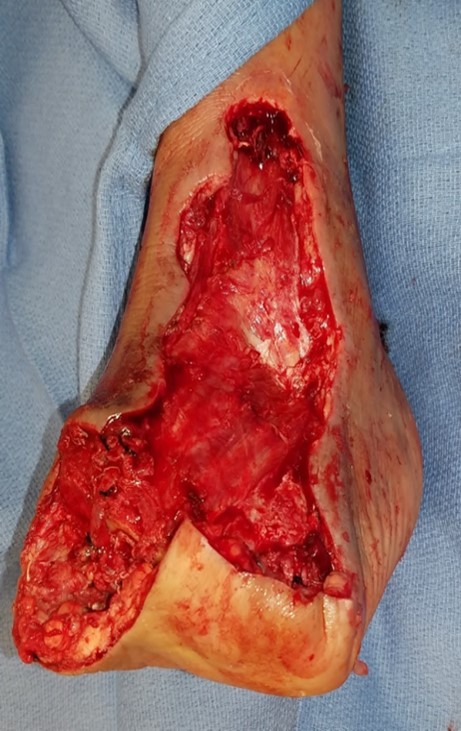 This important step accelerated healing as we were able to obtain coverage of cortical bone, providing a bulky stump with plantar tissue and reducing the amount of biologic and autologous grafts needed for coverage. For the remaining exposed dorsal fascia, we applied a collagen-based biologic graft to the open amputation site to promote granulation as well as a subsequent bolster dressing to decrease the likelihood of hematoma, seroma, infection, and delayed healing (see Figure 2b). 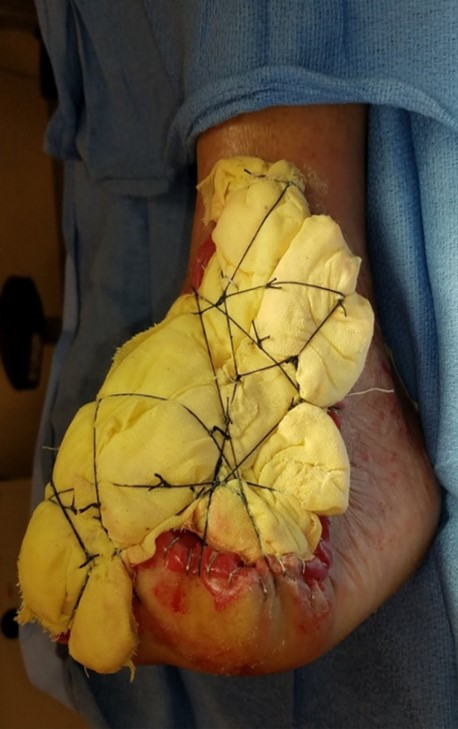 The patient was followed closely in the outpatient clinic setting. Four weeks after the staged debridement and graft application, greater than 50 percent of the wound surface area had healed with healthy granulation. The patient displayed excellent strength and ankle range of motion in all planes of direction. Given the extent of granulation and dorsal location, we decided to formalize the wound with an autologous split-thickness skin graft (STSG). The STSG completely incorporated with epithelialization four weeks after surgery as shown in Figure 3c. The donor site healed without issue as well. The patient was fitted for a custom ankle foot orthosis brace and extra-depth shoes to accommodate the healed amputation site. 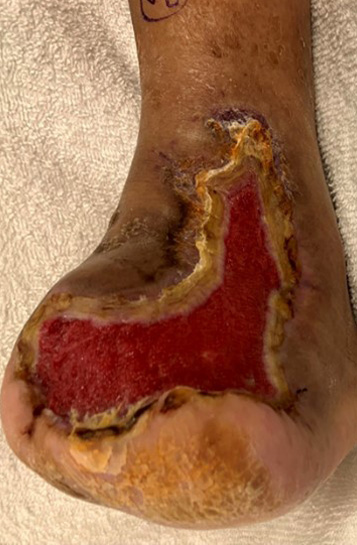 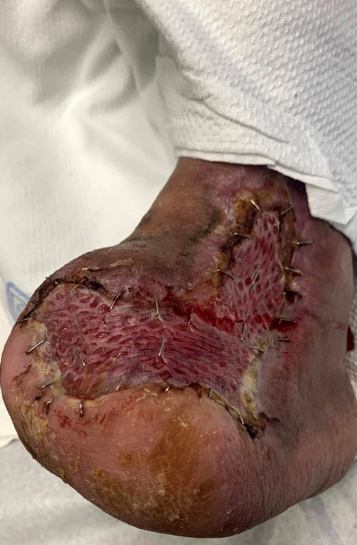 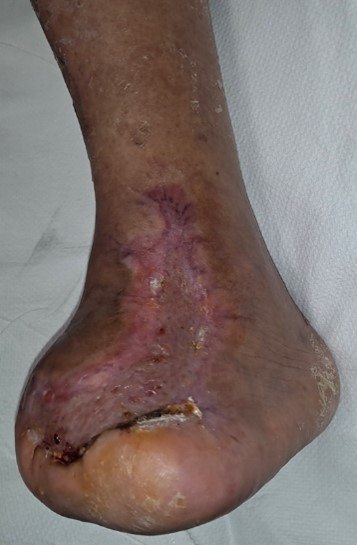 It takes a team of health care providers to address all aspects of the diabetic foot infection. Surgical intervention for limb-threatening infections in the lower extremity should be completed in a timely, appropriate manner. It is inadequate to simply debride devitalized anatomy and await results. Every decision a thorough limb preservation surgeon makes is geared toward achieving a plantigrade functional foot. Wound examinations must include non-invasive vascular diagnostics along with consultation to the vascular specialist in the context of peripheral vascular disease.7

Once the patient’s vascular deficits have been addressed and there is resolution of the infection, surgical closure is warranted while taking biomechanics and durability of amputation stumps into account. Post-operative short and long-term wound healing are possible with management of comorbidities, aggressive surgical intervention of wounds, proper bracing and shoe gear for ambulation, and continuous preventative maintenance.

Dr. Matariyeh is a Podiatric Surgery Fellow with the Southwestern Academic Limb Salvage Alliance (SALSA) and the Keck School of Medicine of the University of Southern California.

Dr. Khan is an Assistant Professor of Clinical Surgery at the Keck School of Medicine at the University of Southern California. He is the Head of the Limb Preservation Program at the Rancho Los Amigos National Rehabilitation Center in Los Angeles.

Dr. Mohammadi is an Assistant Professor of Clinical Surgery at the Keck School of Medicine at the University of Southern California. She is board-qualified by the American Board of Foot and Ankle Surgery.

← Prev: Harvard Vascular Surgeon Becomes First Recipient of ALPS Traveling Fellowship Next: What The Numbers Reveal About Costs, Complications and Prevalence of Diabetes →

END_OF_DOCUMENT_TOKEN_TO_BE_REPLACED

In a case involving the treatment of necrotizing fasciitis in a 30-year-old patient with diabetes...