A 49 year-old Hispanic male with a past medical history of type 2 diabetes mellitus, hypertension and end-stage renal disease (ESRD) on nightly peritoneal dialysis presented to the emergency department with worsening toe pain and subjective fevers.

The patient first noticed an ulcer on the lateral aspect of his right fourth toe approximately one day prior to presentation. He was hemodynamically stable with leukocytosis and elevated erythrocyte sedimentation rate (ESR) of 78 mm/hr and C-reactive protein (CRP) of 112.51 mg/L. A radiograph revealed no osteomyelitis. He was discharged from the hospital with a prescription for doxycycline 100 mg BID for 10 days.

He presented back to the emergency department 13 days following his previous emergency department visit due to worsening pain and increased skin breakdown. He reported a foul odor from his foot but had no frank purulent drainage. The patient reported subjective fever and chills overnight but denied nausea, vomiting, shortness of breath or chest pain. Physicians in the emergency department started the patient on vancomycin 1 gm every 24 hours and ceftazidime 500 mg every 24 hours and admitted him to the University of Alabama at Birmingham (UAB) University Hospital for management of an infected diabetic foot wound.

The podiatric service was consulted. The patient denied any trauma to the right foot. He did have a previous left hallux amputation in 2015 after stepping on a nail. While the patient acknowledged smoking in the past, he denied current smoking or the use of recreational drugs.
Examination of the foot demonstrated non-palpable dorsalis pedis and posterior tibial arteries. The popliteal artery was palpable. Testing with the 5.07 Semmes-Weinstein monofilament revealed a loss of protective sensation. The fourth toe was necrotic and there was a dorsal phlegmon and discoloration on the plantar aspect of the foot.

The vascular service was consulted. While the vascular team did not obtain ankle-brachial indices (ABIs) due to calcified vessels noted on radiographs, they did obtain other non-invasive vascular imaging (see Figure 1). The pulse volume recording (PVR) waveforms were blunted in both the anterior tibial (AT) and posterior tibial (PT) distributions. The PVR waveforms in the first toe were flat, indicating severe distal/pedal disease. After an initial right lower extremity angiogram, the vascular team felt the patient had enough perfusion to heal with adequate control of his infection. 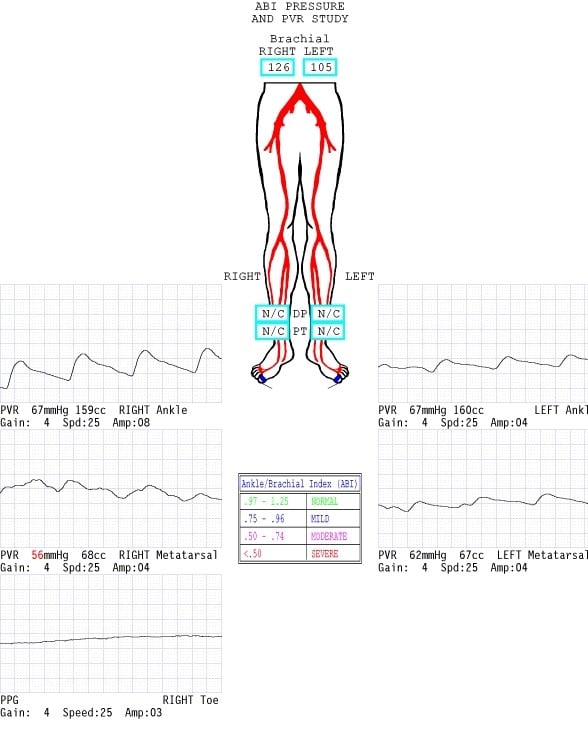 After several days of the antibiotics vancomycin and ceftazidime and local wound care, the patient’s wound site improved. On postoperative day eight, the patient was taken back to the operating room for a partial fourth metatarsal resection and closure. He was discharged two days later. The infectious disease service prescribed intravenous piperacillin/tazobactam 4.5 g daily for one week.

Upon the patient’s initial postoperative visit in the outpatient clinic one week later, the surgical site was doing well. Home care was providing surgical site surveillance and dressing changes. However, when the patient returned two weeks later, there was dehiscence of the incision site with a gap of 5 mm, necrotic skin edges, erythema and malodor.

After readmission of the patient to the hospital for further surgical care and vascular intervention, vascular surgeons obtained a repeat angiogram (see Figure 2) and subsequently performed a percutaneous transluminal angioplasty of the atretic dorsalis pedis (DP) artery with a 2 mm balloon. While it is difficult to demonstrate on still images, the flow through the anterior tibial artery was initially sluggish in comparison to the posterior tibial artery. After focal angioplasty of the dorsalis pedis artery, the rates of flow through the AT and PT arteries were equivalent. Delayed imaging demonstrated more robust collateral vessel filling in the foot, providing a “blush” in the wound (see Figure 3). Post-intervention studies demonstrated the improved waveforms (see Figure 4). 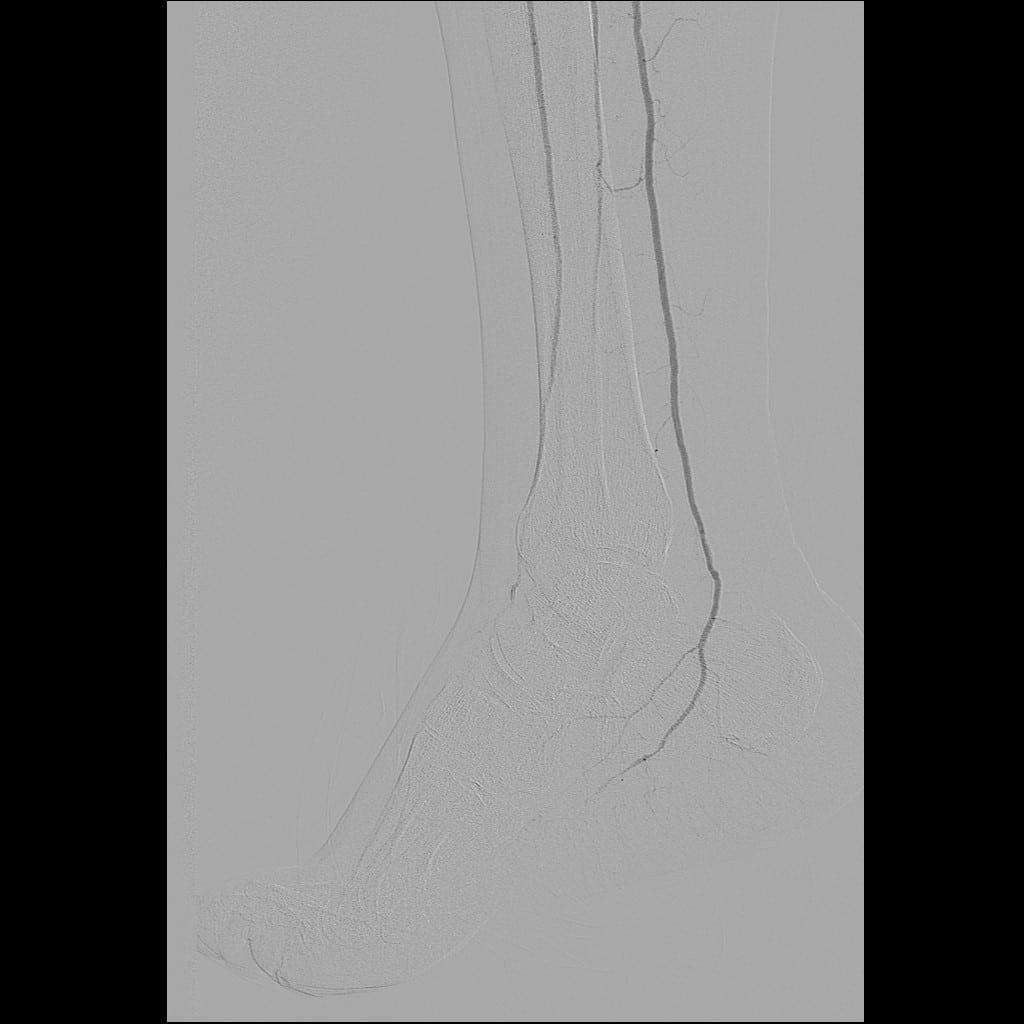 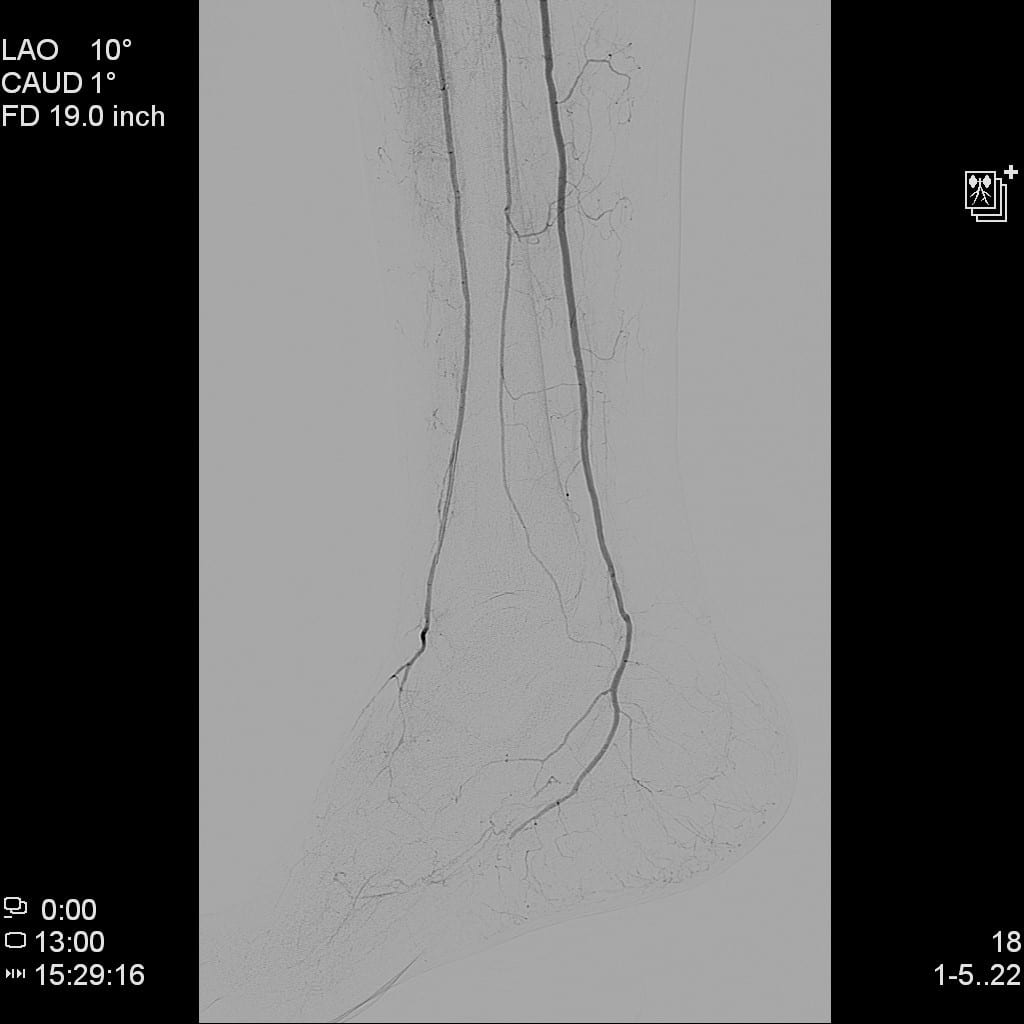 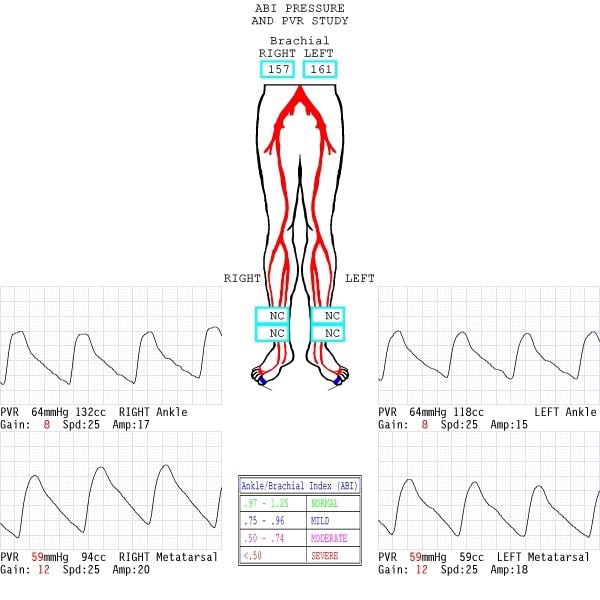 Following vascular intervention, the patient had a guillotine transmetatarsal amputation (TMA). Podiatrists subsequently applied an Integra Meshed Bilayer Wound Matrix (Integra LifeSciences) to the TMA site along with negative pressure wound therapy (NPWT) (VAC therapy, KCI/3M). After five days, the VAC therapy and dressing were removed, and the silicone layer was removed from the Integra matrix. After reapplying NPWT, we discharged the patient home with NPWT dressing changes occurring every Monday and Thursday. The patient had NPWT for four weeks until the development of a granulation wound bed that would support a split-thickness skin graft (see Figure 5). He was subsequently referred to plastic surgery and the skin graft procedure was completed. The skin graft started to incorporate within two weeks and there was weekly debridement of nonviable tissue (see Figure 6). 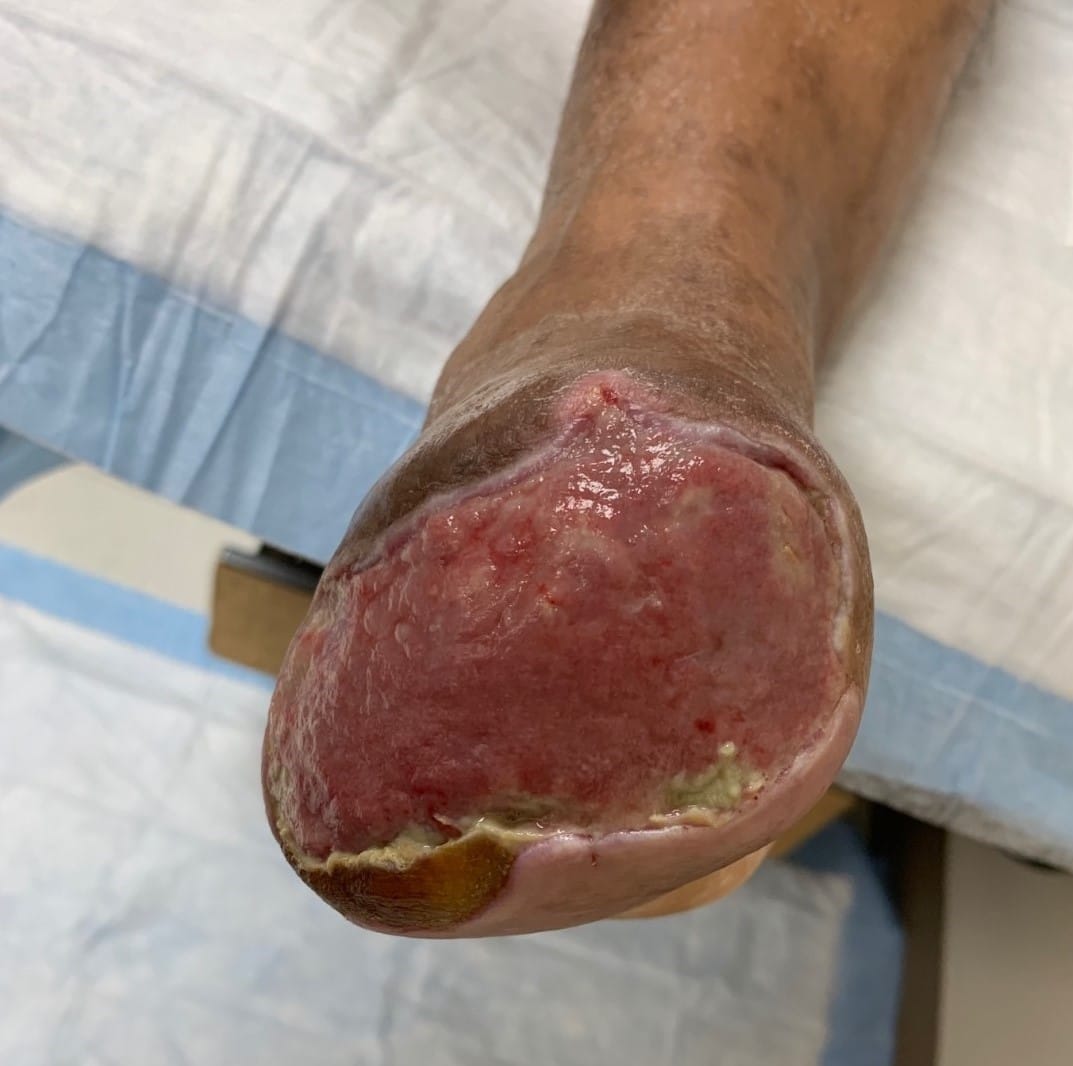 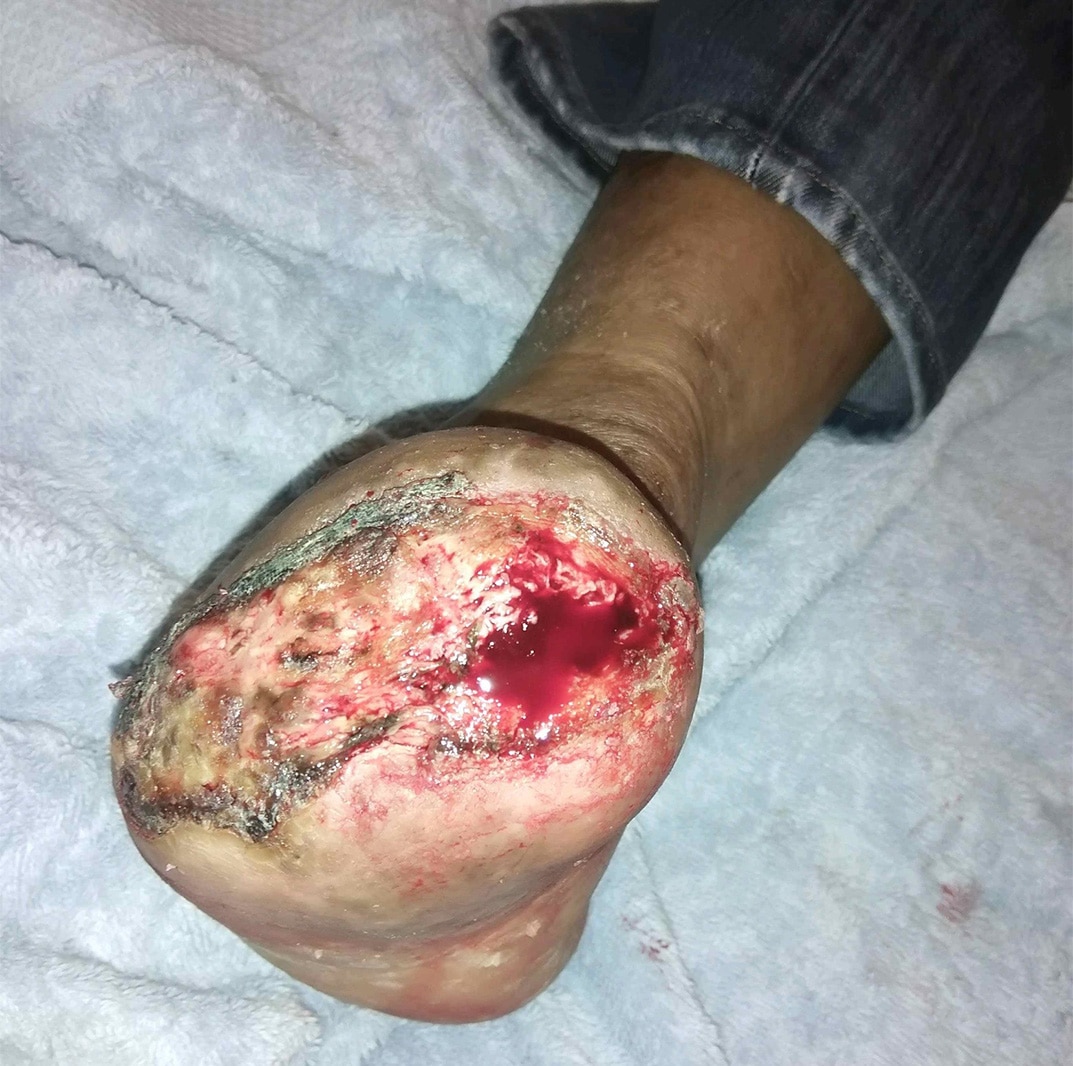 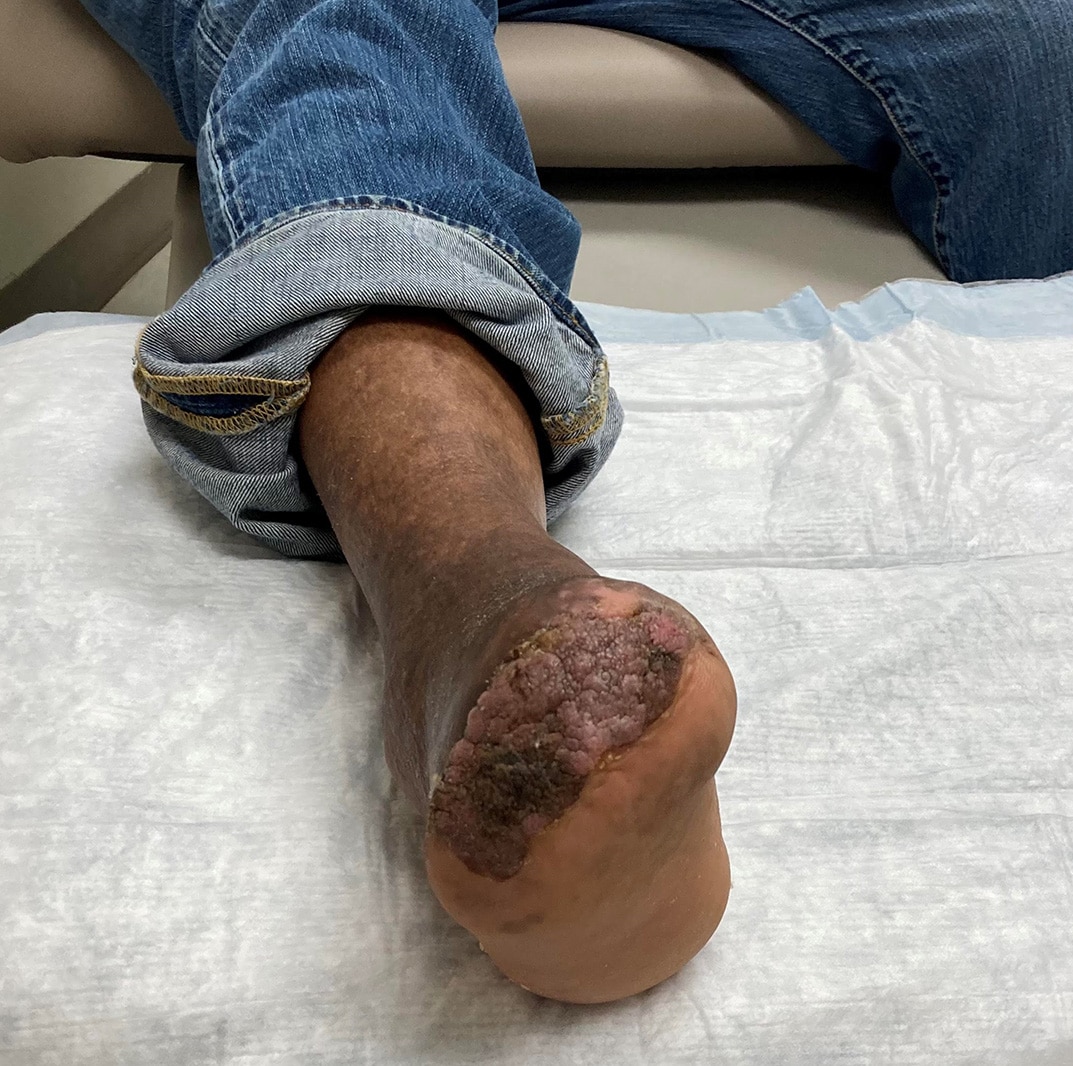 Dr. Haverstock is an Assistant Professor in the Department of Surgery at the University of Alabama at Birmingham (UAB). He is the Co-Director of the UAB Advanced Limb Preservation Clinic. Dr. Haverstock is board-certified by the American Board of Foot and Ankle Surgery.

Dr. Unger is an Assistant Professor in the Department of Surgery at the University of Alabama at Birmingham. He is a Diplomate of the American Board of Foot and Ankle Surgery.

← Prev: Vertical Contour Calcanectomy: Is it a Viable Option to Treat Infected Heel Ulcers in Patients with Diabetes and PAD? Next: When a Patient with Diabetes, PAD and ESRD has Dry Gangrene on Multiple Toes →