Learning From the Success of Others
1. December 2022
Eskild Bang Heinemeier 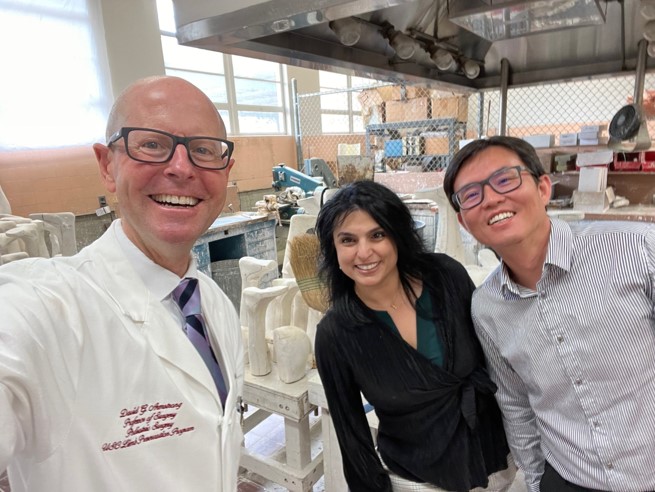 “You can do the most beautiful bypass in the world. If your podiatrist and your wound care team cannot offload and properly get the patient to be healed, that leg is going to get amputated,” says vascular surgeon Dr. Anahita Dua.

“And so, you can’t say what is most important for a flower: The soil, the seeds, the water, or the sun. Which one would you cut?”

As the first recipient of the ALPS Traveling Fellowship, Dr. Anahita Dua has already created and implemented the multidisciplinary approach to limb salvage at Massachusetts General Hospital, where she is a vascular surgeon and director of the Vascular Lab, as well as co-director of the Peripheral Artery Disease (PAD) Center and Limb Evaluation and Amputation Program (LEAPP), Clinical Director of Research, and associated director of the wound care center.

She applied for the traveling fellowship to get to see places, where they had a working limb salvage program.

“I didn’t want to make the mistakes of starting a PAD program that have been made before. Rather, I wanted to learn from programs that have been successful so we can implement the best pathways at my institution,” Anahita Dua says and adds:

“One of best ways to cut the fat and go straight to doing the right thing is to learn from other people who have already done it and been successful.”

Here she witnessed how Armstrong and his colleagues have built up a system for limb salvage based around a multidisciplinary approach, where coordination between the different medical fields associated with PAD and foot ulcers is essential.

“This sort of comprehensive, almost leadership level learning is one of a kind. There is nothing else out there that can teach you this specifically. It’s a fantastic idea, and it doesn’t require a major commitment in the sense that you’re not going to immerse yourself for six months somewhere. Coming the one week is perfect, because I’m not coming to learn how to do a bypass, I’m coming to learn how this bypass fits in with this podiatry situation, or with this wound care situation, so this leg can be saved,” says Anahita Dua, adding:

“It was very fulfilling, and I learned a lot, and of course brought it back to Mass General and we’ve already implemented it.”

It has been done with cancer

The problem with the general treatment of peripheral artery disease and leg ulcers, according to Anahita Dua, is the lack of coordination and standardization. This means that a lot of patients do not get the appropriate treatment in the right order.

She compares it to the way cancer treatment has been developed:

“The cancer world said, this is what we need to be successful. And then the hospitals, who wanted to have a cancer program, had to ensure that those pieces were there. You can’t have a pancreatic surgeon but not have radiology, because then you’re not doing a service to that patient,” she says and continues:

“And we as a PAD world need to do that. What is the way to do it? You have to have these sorts of interdisciplinary exchanges, like we’re having, and come up with the best way forward.”

This is a task that is important for health care professionals to engage in, Anahita Dua says:

“I think the health care professionals need to really make an effort to say, this is the way that we need to manage these patients, and bring it to the forefront, get it in the guidelines, communicate it to each other, and say that this is the new standard.“

Anahita Dua has now been on her first of two trips with the Traveling Fellowship. For the next trip she plans on going to The United Kingdom to get a different perspective.

And seeing it physically for herself is important in order to learn:

The interdisciplinary exchange is a key aspect of ALPS’ mission, and an important factor for the improvement of PAD care and limb salvage, which makes ALPS a crucial platform, says Anahita Dua:

“I think ALPS as a platform can allow the exchange of ideas between different groups and be the model for how it should happen. The traveling Fellowship allowed me to take something from USC and bring it to Mass General, and that wouldn’t have been possible without ALPS facilitating.”

According to her, this exchange of ideas and collaboration is paramount to the future of PAD care, because it is an ever rising health issue in today’s society.

“As we move forward in this world, PAD centers are going to pop up like crazy. Because they have to. That’s what people need right now. That’s what society needs. In this day and age, PAD, CAD, atherosclerosis, these are the killers amongst us. And so, the more we educate ourselves now, we are going to be ready for this avalanche of patients that are coming in the next 20 to 30 years. So to the young people: go out, go learn, immerse yourself, network with these leaders, so that as the next 30 years unfold, you are in a position to really communicate things that you’re learning, so that the world can essentially become a better place.”

She is also an assistant professor of surgery at Harvard Medical School.

The primary purpose of the American Limb Preservation Society Traveling Fellowship is to provide the recipient with the opportunity to visit two limb preservation centers of excellence.

Recipients will be afforded the opportunity for professional growth aligned with ALPS’ aim to serve as an interdisciplinary bridge that identifies, develops and mentors the next generation of clinicians, scientists and clinician scientists working to preserve at-risk lower extremities. Accordingly, applicants shall identify two centers at which they will spend one week in mentorship. During their time at these centers of excellence fellows will further develop their capacity to implement interdisciplinary team based care for patients at their home institutions and also enhance their capacity to serve as future leaders in the advocacy for limb preservation.

The Traveling Fellowship will provide up to $7,500 for expenses covering travel, research, and clerical assistance.

This article was submitted by ALPS' industry partner Nevro.Recently approved by the FDA with a...

END_OF_DOCUMENT_TOKEN_TO_BE_REPLACED

“I hope we learn a lot”: New ALPS student chapter in Florida

The local student organization for wound care had barely been accepted as an ALPS student chapter...